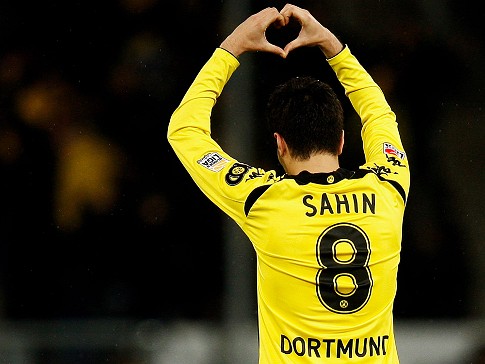 …Nuri Sahin: A Fantastic Signing in my opinion.


So it’s official. Nuri Sahin, formerly of Borussia Dortmund is now officially a Real Madrid player.
He is now the 3rd Bundesliga player to join Real Madrid in Florentino’s 2nd stint at the Madrid presidency following Sami Khedira and Mesut Ozil. And if it’s true that a move for Bayern Munich’s Hamit Altintop is on the cards, that would make for potentially the 2nd of 3 players of Turkish Descent (based in Germany) to join Real Madrid.

Quality, Dollars (or in this case, Euros) and Sense

There are plenty of key interesting points to note following Sahin’s arrival at Madrid that reflect a change in the Florentino Perez Version 2.0 transfer policy. Following his opening salvo of mega galacticos that include the 96m Euro Ronaldo, the 65m Euro Kaka and the 35m Euro Benzema and Xabi Alonso, Perez’s most notable signings for his second transfer season were clearly of a different type on many levels. Firstly to note was the fact that the signings were not of the Galactico profile or price (the closest, price-wise was the 25m Angel Di Maria), next was the fact that barring, Ricardo Carvalho, they were essentially young players (Ozil, Di Maria, Khedira, Pedro Leon and Canales) – but most intriguingly, they were very good deals financially. Carvalho, age 32 cost us 8m Euros, and if he plays another year or so like he has this season then I’d say he’s dirt cheap. We paid 7m for Cannavaro for the 2 years that exposed the fact that he was on his last legs at the World Cup (to the point that even his beloved Napoli said ‘No Thanks’ to him when he left us). The 2 Germans (Ozil and Khedira) were heading into the final years of their respective contracts and cost 15m each. Khedira has made 35 appearances and has become a vital cog in Mourinho’s midfield. Ozil on the other hand is starting to get astounding comparisons to the likes of Zidane. Perhaps to put Ozil’s success on the pitch and in terms of how much he cost, consider this: while much of Madridisimo has started to contemplate the possibility that the 65m spent on Kaka has been a waste and that he’s probably at best only worth 30-35m by now, if we add Kaka’s 65m with Ozil’s 15m, that’s 80m = 40m per player (for Kaka and Ozil)… all of a sudden the Kaka money wasn’t so badly spend after all!

Nuri Sahin arrives under similar circumstances: 22 years old, having been the engine that drove his team to the Bundesliga title and heading into the final year of his contract. He arrives amidst rumblings of other possible acquisitions by the club which also supposedly include: Bayern’s Altintop on a free transfer and Espanyol’s ex-canterano Callejon for 5m. 10m Euros for a 22-year old central midfielder of his talents is ridiculously cheap. To put all of this into context, the total transfer cost of these 3 players is only 15m – the price of Sami Khedira. I have no doubts that we can sell Fernando Gago and Pedro Leon for at least that amount – which technically means, we haven’t spent at all.

There will be perhaps the sentimentalists who would have continued to fantasize a transfer coup by landing Cesc Fabregas (perhaps inspired by the delusional rumblings of the English media) or the romantics who would have liked to see the return of ex-canterano Borja Valero. 35m pounds is the supposed price tag on Cesc (who’s openly a Cule and would probably only return to Spain wearing Azulgrana) while Valero certainly isn’t as cheap as 10m either. For Madridistas, the absolute dreadful (but potentially realistic) possibility of seeing Barca swoop for the pearls of our cantera like Borja and Juan Mata will have to continue… because however which way one wishes to cut it: this transaction is damn good business for any team, nevermind Real Madrid. I would also like to point out the fact that Sahin’s signing alongside the supposed deals for Callejon and Altintop are a pleasant surprise considering the timing of the signings: a refreshing change to the last-gasp purchases which Real Madrid have been infamous for during the past several transfer seasons.

I won’t pretend to know all about Nuri Sahin. Given that I’m not a regular follower of the Bundesliga, my knowledge of him and his capabilities are still yet to be firmed up. I only know of him from what I’ve seen on the Bundesliga weekly shows which I catch on occasion as well as from the article here and there to read online. I do know for a fact however that he generally plays as one of the team’s 2 ‘pivots’. This is a role that he shares with one of Germany’s Bender twins who plays the ‘Khedira role’ as the midfield utility man to win balls, aerial challenges, make short neat passes and keeping play connected yet simple. It is Sahin apparently who played the ‘Xabi Alonso role’ during this season’s Bundeliga-title-winning campaign. It was his ability to link up with Japanese Dynamo Shinji Kagawa (perhaps a similar relationship between Xabi Alonso and Ozil or Di Maria) that has been crucial to Dortmund’s success this season. And though it is clear that Sahin is no ‘conductor’ of the orchestra as Xabi Alonso is (there is no one in the world that is currently like our Basque Pass Master), the young Turk is more mobile and is more comfortable in a slightly more advanced position (but not to the point of being a ‘10’).

A quick review of his highlights shows great vision and the ability to make precise and direct goal-making chances from a variety of positions in midfield: showing that he can be effective in this role whether positioned deep, playing box-to-box or even from advanced positions. Perhaps the compelling statistic about his is that he is the man in the Bundesliga who has created the most scoring chances this season. To be able to do that from a true midfield position (as opposed to a ‘10’ position) – is no joke.

I’ve often heard many complain about the fact that Real Madrid are not quite the same team without Xabi Alonso. I continue to believe that this will be so even despite the arrival of Sahin. I do believe however that Madrid will not be as lost without Xabi Alonso as they have been these past 2 seasons now that Sahin is onboard. At this point in time, I can imagine 2 distinct roles for Sahin: either as a substitute / understudy to Xabi Alonso when Mourinho makes use of his Double Pivot system or as Xabi Alonso’s ‘creative partner’ in a trivote, while backed up by a utility midfielder: a role Khedira and Lass fulfills effectively.

This effectively means in my opinion that Gago will likely be shown the door this summer. The Argentine who has neither mobility, tackling capability or an impressive passing arsenal can hopefully fetch a decent price in the transfer market. Also to watch this summer is if Lassana Diarra will stay or go knowing that he will remain a squad player (I can only hypothesize that this is the reason why the acquisition of Altintop is being considered alongside the permanent return of Mateos from his loan at AEK Athens).

The big question marks however will have to loom over the team’s canterano aspirants: Firstly Granero, who will have to accept being pegged back in the pecking order of midfielders. Perhaps there’s a bit of hope for him should Canales go on loan and he plays the role of being the 3rd-choice ‘10’ behind Ozil and Kaka (where Mourinho has said he is well suited for) and also as an option for one of those Central Midfield spots (with Khedira, Lass and Sahin). Followers and fans of Dani Parejo, who perhaps are still hoping to see the return of the canterano will perhaps look at this with a bit of alarm. But let’s be honest here: while Granero and De La Red have won themselves places to the Spanish National Team on the back of their performances for Getafe, Parejo on the other hand has yet to reach this level.

I’d like to end with a little confession: I first came across Nuri Sahin 5 years ago… playing FIFA 2007 on my PC. Playing Real Madrid in the manager mode, I bought him as a teenager in the video game and saw him turn into an absolutely fantastic player. 5 years later, here he is 22 years old, the best midfielder in Germany and just about to pull the white shirt on. It’s funny how reality follows ‘fiction’.

Be sure to check Madridista Mac’s blog!
.